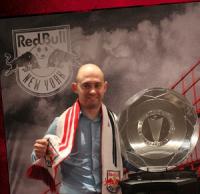 Donovan summed it up
2026 keep most of team who hopefully grow
Needs
1. #9
2. Figure out how crate chances
3. Depth that can step in almost at level of starters

For curiosity, I checked how many "Red Bull GmbH" affiliated players are in the World Cup.

Yeah, I'm assuming/expecting a multi-goal German win over CR and Spain not losing to Japan. Obviously not guaranteed, but oddsmakers seem to agree. Vegasinsider.com has Germany at -400 to progress, Japan at +400, and CR at +800.

Hilariously wrong so far at least

He plays a little bit like Morgan imo. He's a hammer in your toolbox. Not gonna do anything too fancy, he's gonna face the opposition goal and run really hard at it.

I like the metaphor of Struber having hammers (and only hammers) in his offensive toolbox.

I think the players should be getting the bulk of the credit for getting out of the group stage, hardly a managerial masterclass so far.

The good news is that we dont have to. Not going to bank on a converted winger who cant stay healthy. Let Harper scrap for reserve minutes.

Someone better would be great, I just would like Harper to be ahead of DNealis in the RB pecking order.

harper is great going forward. i get nervous when he has to defend. some of those yellow cards could have been red cards. he makes some bad tackles.

Agreed but that's easier to learn/coach than speed (obviously) and offensive acumen. I'm fine with leaning into the Harper experiment.

Germany came back to tie France Spain. Almost eliminated in the first round again. Still in last place in their group.

Germany should qualify easily with a win over CR, which is of course the same thing Japan thought before today.

Low key I think our creativity problem is almost as bad as our striker problem was last year. If you take out Luqui our best playmaker was CCJ. Only time our attacker look sustainably good was when Amaya was cooking to start the year.

Was that because of lack of creativity (ex-Luqui) or because the strategy was to dump it long and chase, or both? Tune in 2023 to find out.

Enough to score a game tying goal in the final by physically overhelming another CB who's pretty good for MLS.

Look, I hope I'm extremely wrong and Long dominates all opposing forwards at the World Cup before getting a massive deal in free agency for his efforts. I just don't think it's very likely that happens. We'll see very soon.

No one is.  Our strikers scored 4 goals in 14 qualifiers.  Our goals come from set pieces and wingers.

Has anyone ever seen Struber and Berhalter in the same room?

Half a goal a game is offensive to me, personally.

If the 5M spent on Klimala got us a striker actually performing like someone worth 5M, we would have had a legitimate shot this season.

Good luck to the guy doing the molding. I'm hoping Dylan Nealis plays <10 games next year, preferably off the bench. If he plays as much as he did this year (1800 minutes, 28 games, 20 starts

), the offseason acquisitions will have been a failure.