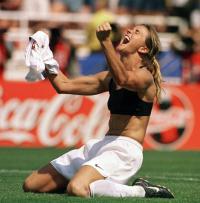 Anyone in attendance at the cancelled DC playoff snowbowl game can attest to the non-existance of a functioning turf heating system.


Functioning being the operative word.
https://www.mlssocce...-red-bull-arena
P.S. The game was postponed, not canceled.

I didnt say USSF is racist - I said there is a shitty attitude there.

You only get the next Pepi to pick the US over Mex if he views it as his team. The trade off on getting young guys like Pepi is, in my mind, you can't avoid ever playing in demographically "tougher" venues.

In your mind, adequately describes it.
The next Pepi will not base his decision on which country to choose to play for on the venues of USMNT games.

I trust our guys to win a dog fight anywhere in the US - will make them tougher.


Were you at the CR game in RBA?
How about the Gold Cup final at GS?

you want them to keep acting like scared underdogs.

Again, BS. I am OK with wherever they play, while agreeing with their choice to play wherever they want, the same as every other country. Unlike you.

Touched a nerve? If the shoe fits

If you disagree with my point, say it.

Fine. Your points suck, as does your reasoning.

Implying I have an immature world view is intellectually weak.