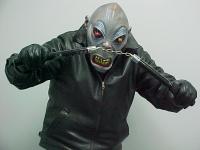 Lets record him a video compilation and send it to him.

I wouldn't mind editing together a video, as I have a tiny bit of editing experience.  But perhaps someone from ESC or VA would be interesting in taking this project over?

Lets record him a video compilation and send it to him.

MPF - dont catch it this year


#1374185 Kaku and Casseres called up for November World Cup Qualifiers

Rick Lawes
@ricklawes
·
1h
Brian White is the fourth player in MLS history, period, to score goals in stoppage time in consecutive games. Danny Royer actually also did it last year, scoring the second goal in 2-0 victories on both occasions"

White has 2 goals in 628 mins.  Barlow 2 goals in 782 mins. Both terrible numbers for starting strikers, but Barlow worse than White.

Barlow also has a tendency to shoot straight at goalies on 1v1 situations. Also, I am not privy to advanced stats (expected goals, etc.) but I'd be willing to guess that Barlow's metrics are pretty low on whatever metric you want to measure. Plus he should have a negative goal on his stats this year or being offsides during Yearwood's goal the other day and causing it to be called back.

I would find it hard to say Barlow has outperformed anyone this year...maybe Tetteh, but that's about it.

I would guess that Barlow is actually relatively high on expected goals because he gets into pretty good shooting positions.  He just rarely finishes.

Holy fuck Davis is so slow on the ball.  Pass already

It's meaningless to discuss home field advantage w/o fans.  It's not the field or the stands that made RBA a fortress.

You re not the only one