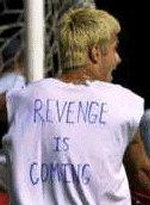 Maybe this will be the move that will force Muyl to be a fullback....

Ah who the fuck am I kidding. That makes too much sense for this team to do.

I'm not a member of anything and I don't care where I sit. Do you think I should I wait till the 25th to get tickets or should I join one of the supporters groups?

Too late to get tickets through one of the supporters groups because they had to submit names and email addresses 48-72 hours before the sale and no more can be added.

Lade was a homegrown signing. He wasn't drafted. Meara was drafted in 2012.

In the post game press conference Marsch basically admitted there isn't enough talent on the team.

This probably wouldn't be an issue if the club wasn't negotiating a buyout with its sporting director the entire fucking winter.

The fact that they are in a giant mob allows them the anonymity of the crowd. It helps them get away with shit. Break seats by yourself or do other shit and you stick out like a sore thumb. And fuck it make them go on the secondary market and pay top dollar.

He's gotta go back to France in order to get a work visa, no?

I'm a believer that if you're going to change coaches you damn well better be sure there's someone equal or better than him that's available to step in. You can make this case for Sigi, but outside of him is there really anyone available to coach at this present moment that's equal or better than Jesse? I don't see it. And the issues with this team don't as much stem from tactics as they do the personnel that's being asked to implement said tactics. And even then... how much can you blame Jesse for it. If the club wasn't dicking around all winter trying to buy out Ali and we had someone in place who could try to buy players to fix our deficiencies maybe we wouldn't be in this position.

This team looks like they negotiated a buyout with their sporting director during the winter instead of buying and signing players.

Rooney is the last person I want here.

He may be 31 but he's a very old 31. Guy's been playing professionally since he was 17 and really hasn't had much of a break between club/England responsibilities. Watching him week in and week out I don't think he has it anymore. Time and the number of games he's played has finally caught up to him. He's going to go back to Everton because it's his boyhood club and it would be nice for him to retire there but I want no part of him in the league.

Keisuke Honda will be heading to a new league, somewhere, this summer.

Not a "sexy" name per se but man he would fun as hell to watch in MLS.

First WCQ in the NY area? This is gonna sell out quickly.

funny how the eye test can be disparet to the stats since we are thinking he looks a bit slow and out of sorts.

I would be curious to know what his chances to create/90 was before the move back to the 4-2-3-1 compared to what that number is after the switch and to see if going back to a familiar formation has pushed that number up (and if so, how much?).

Well guess I can just edit in Lade's name in my line up predictions up above, eh?

HIs grandmother passed away. He posted a photo on FB.

Mike I think you are a down to earth guy but you got to pick your battles and let this one go.

Ok so the front office took away tifo for a couple games. Big fucking deal! Life goes on.

Yet for some people (and an ever-growing contingent in the South Ward) they feel like they must find something....anything to bitch and moan about so they can perpetuate this silly "oh woe is me, I'm being victimized" narrative.

You have people threatening to cancel season tickets, capos writing articles online about how everyone is being neglected and abused by the club, countless angry posts on social media all over what??? Banners that get held up for 30 seconds before each game?

Not worth the anger.

In the grand scheme of things yes, life goes on. Shit happens.

Why is there so much anger over the sanctions?

1) Because in ESCs case it took the front office a week and a half to hand down its punishment. Another full home game went before the front office decided to do something. If it was *that* egregious then it should've been dealt with immediately, don't you think?

2) There was no warning, no "next time you do something you'll be sanctioned," no nothing. If there was some sort of warning and the SGs decided to say "fuck you" to the front office and do what they wanted then fine, whatever. But there was nothing. And to sanction two sections of supporters who live, breathe, and die for the club, travel all over to away games, who paint tifo before games, who hang banners to help provide atmosphere, over something innocuous is, frankly, bullshit.

So to you it may not be worth the anger. But to others it very well could be.