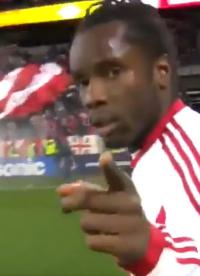 Agree. Consider me impressed with the rate of these deals being closed. Very good stuff. If Vanzeir is good then we are in a really good way with our forward situation. Now hopefully have resources for the summer window to make an improvement. I know some people think CB is a must right now but I'm willing to watch a few months

Are they going to spin this as some sort of hat tip to the state of NJ? I don't have an issue with that in theory, just think the execution could've been a bit better, and I'd really rather them start using the word RB on the front instead of the logo; often the training jerseys are better looking than the real ones & we've been staring at the logo for 17 years. Shit is tired.

But, either way, everything from arm pit lasers to the gunmetal gray kits from the early 2010s are just window dressing. Fix the FO, do some legit marketing, sign some truly high quality players (I don't care about name/salary, but spend enough to get the guys you need to win). I'll ignore a stupid jersey if the team wearing it wins something.

If I'm making a second jersey I'd go back to the only unique look left to us now that Atlanta has stolen the red & black vertical strips, and that look is the white/black verticals for an away jersey; You can write RedBull on the front in red or black, etc. At least we'd stand out, and have SOME identity to call our own. But, I'm not making the jersey & that isn't energy drink enough, so, nvm.

Can these stripes be done with current silly rules on colors on jerseys?

In Topic: Dante Vanzeir more than a rumor

So will he join the team for preseason? If so, this has to be one of the first proactive signings in years! Hope he has success with us.

In Topic: Dante Vanzeir more than a rumor

Got the email about this yesterday, it's 1 free subscription per account. Starts Feb 1st

Sorry.  This means if I have 2 tickets its 1 account.  Wondering if 2 people can use like Netflix.  Probably need to stay tuned for details.