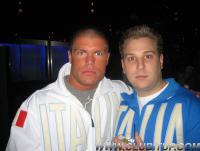 Also we have a game this weekend!!
should be interesting as C Bus is a tough style match up for us and as they are currently out of the playoff standings they will really need to press the game which hopefully opens things up for us.

It seems to have slipped under Jan Halvor Halvorsen's nose

Thanks to this hint, I got it on my first guess.

Got it in 2 guesses because my first guess narrowed down the uniform number down to where it could be only one of two players.

I think his name has more to do with it,

He's #2 in sales because no Fuchs are given.

Whose the 3rd? I can't remember another one

Add to the list the time Petter Villegas was left off the starting XI and was clearly upset about it. Instead of warming up on the field pregame, he was just repeatedly shooting the ball against the wall in Giants Stadium near me. He eventually over shot the wall and blasted some guy a few seats away from me in the face, breaking his glasses.

Contenders:
Babjide Ogunbiyi - 17 days failed physical
Nick Rimando - 14 days before sending him back to RSL
Quincy Amarikwa - 14 days, though technically never "signed" with us. We claimed him off waivers then he trained with us until we traded his rights to Toronto 2 weeks later.

Gah I just realized Philly area blackouts will prevent me from watching this game... Down in the area for the weekend and don't have access to the regional sports network... vpn my best bet?

You're in the Philly area? They usually have their games on WPHL17.

Looks like that's a picture of him on the RBNY Instagram page training and wearing the #11. If so, he might be the best #11 we've had since Carlos Rivas.

OMG, is it too early to worry about who we will protect in the St. Louis expansion draft?

Another incompetence anecdote -> when the stadium opened, we went to pick out new seats as season ticket holders per the priority list based on how long you had season tickets. It was a cool event. Prior to going, they sent out seating charts, sun/shade maps, and section pricing. It was lots of fun looking through the stuff before hand, and figuring out what sections we thought could be better than others. While at the event, we were on the phone with other members in our group. We selected seats in 107, row 5 I think. Fast forward 3 years, maybe, they decided that area was now premium and cost significantly more. A few rows up remained regular level pricing... but those seats were already taken by season ticket holders behind us in the priority list. I basically got a "tough shit" from the ticket rep when I complained. A competent FO would have grandfathered those season ticket holders in or at least reached out and try to make it right. They lost 7 season ticket holders that day.

Fuck Chris Heck. If I didn't have first row in 107, I would have saved money and moved back to the last row like a number of other supporters did.

Ruben Bover and FC Andorra have been promoted to Segunda Division in Spain for the first time ever. Their first game is today against Real Oviedo. He still wears the 21 that he wore for the Metro. Bona sort!

Edit to add: Ruben goes 90 in a 1-0 win against a top-third team from last year.