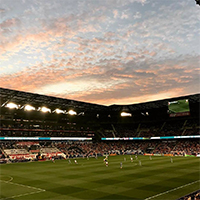 CurbYourNewUrbanism hasn't added any friends yet.

Take a page out of their book RB...

Sounds like the NHL is doing the same and reports are that the Euros will be moved to 2021.

Im guessing the bean counters at Red Bull did an analysis and decided it is better to make money from ticket sales rather than give them away just to fill the stadium. Mathematically, it may be more profitable to do it that way.

It also helps protect the value of season tickets somewhat, because season ticket holders don't feel like they are surrounded by people paying 20% of what they did to get in. I've read about teams in other leagues taking the same approach, reducing discounts, freebies, etc. which drives attendance down but not necessarily revenue.

For me it has been a factor (one of many) in never considering giving up my membership, because I have been able to consistently resell my ticket when I miss a game for just slightly under what I paid for it (sometimes more).

The counter argument to this is that you get people in the door by whatever means necessary and hope they spend money on food and drinks, have a good time, and decide to return for more games.

Here's an interesting thing; RBNY night at the Nets: https://nets.spinzo....ulls-night-ncnr

There's actually a new bar that opened on the 1st floor of the new apartments near the stadium. I went once or twice last year. It's more of a restaurant with a bar area, but it was a good option for pre-game drinks. It's called Joia restaurant, on the corner of Frank E Rodgers and Crucible.

Yeah that place is really good, I stopped there for drinks before a game late last season. There's also a new bar by the PATH station called Vanguard that I have not tried yet. I'm sure more stuff will pop up as more of the new buildings are finished. The development between the station and the stadium is going to be huge.

The ad was on the corner of 7th Avenue and 33rd Street, directly in front of Penn Station, which has 650,000 users a day, a couple hundred thousand of which see RBA out the window of their train every day.

Players can still leave after the window closes there.

"Per source, Murillo's transfer fee was high six figures, with potential to get to seven based on performance or sell-on fee."

These moves probably make sense but they don't feel very good... The next several months are critical to the future of this team. This needs to be one of the most active offseasons they've ever had.

A chance to play in the Premier League? Id assume thats a dream for any player.

He can come back to MLS whenever he wants so theres really no downside for him.

According to that article the entertainment and dining options will still be open.

Feels good to be the ones to do that to a team for once.

Smooth move on the marketing front. "RBNY announce the signing of Federico Martinez from Liverpool"

Update on the PATH front, the Port Authority just announced the eastbound platform opens this Saturday.