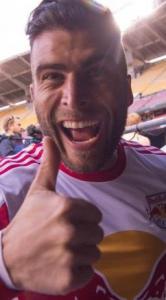 RandomHero hasn't added any friends yet.

Honestly, every new MLS fanbase comes in and is super entitled, annoying, convinced they're the best thing since MLS was invented.  The ONLY fanbase I can think of that has come in and been humble is Minnesota and that's because they suck.

Toronto: You've never seen fans like us, we're gonna save MLS, we are more authentic football fans than you *miss playoffs for 8 years*

Portland:  Fuck the man, man.  We're gonna change our crest in the tiniest way possible to show how authentic we are.  Most authentic in MLS *yeah that's still kinda accurate*

NYCFC:  We're really a new york team, look at our old Italian in midfield and our subway token (MetroCard OUT) and our name that has City and FC in it and our middle eastern airline sponsor

Atlanta:  We're the best at everything and have the only good coach and the only reason we ever lose is because the MLS hates the south

They'll get over it in like 2 years.  But the first 3 years, every freaking fanbase is insufferable.  Wait till Cincy gets in.

Im surprised LAFC hasn't bee overly annoying but it is only a third of the way through the season.