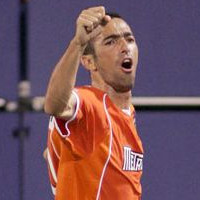 Voice of Reason II hasn't added any friends yet.

That is really insulting! What does it even mean?

Haha, cut him some slack. The proper saying is "casting pearls before swine".

I never GIVE UP on anyone.

I dont like that it has taken him this long to get back into the fold. That is a red flag to me. So Im putting him in the same boat as valot Bezecourt and Duncan. Im not counting on any of them. Or rather, Im counting on them not to be 100% healthy for the season. So I want management to plan accordingly. Which they havent.

But look WTF do I know about whats going on in training and their progress? Absolutely nothing. All I know is Ive seen a lot of key players have major injuries over the years which effectively ENDED their careers.

That's crazy. By your logic they should already be adding new players for the ones they somehow magically know will be injured during the course of the season. They also somehow have stolen the LA playbook which will allow them to carry more than the maximum number of allowed players and somehow not have all of those additional salaries count against the cap.

"Due to circumstances beyond our control, we will not be playing Real Salt Lake on Thursday. We will play a closed-door match. Our opponents technical staff has asked that the match not be streamed or photographed. No information will be provided from the game."

No information provided? How will this affect the Brian Kelly Award?  Conspiracy indeed! LOL

God, these tabloids are worthless trash.

Except when they make DCU look bad...

Actually now that I think about it more, doesnt this just have ship this guy to Leipzig when hes 21 and starting to hit his prime? If he plays good, I could totally see it happening.

In fact, look at the Dutch league that produced a wealth of great players almost all of whom moved on to bigger clubs.

Ajax alone has lost players like Bergkamp, Cruyff, Van Basten, Ibrahimovic, Davids,  Sneijder, Suarez and countless others over the years.

12-16 PSG (he stayed an extra year, must have loved the French cooking)

If they are any good they will move on, especially if you are a feeder league. Keeping them for 3 years is good. 5 is great. Just get used to them going, that means they were worth having.

Is the new guy an all star winger?

Also, for anyone thinking were good to go at outside back: We are not. Who knows what Taxi and Duncan will be like when they come back. That was a bad injury for Duncan. And Im surprised its taken Taxi this long to get ready. That concerns me. Murillo...who knows. Guy is a wild card with his European ambitions. They needed to sign another piece here. A legit piece. Its going to come back to haunt them at some point.

Needed a legit outside back and a winger. Got neither. FAIL.

Sometimes it is a matter of language:

Not just fail, but FAIL? Quite a bit of hyperbole.

"Gaping" hole? Again, the choice of words implies a big problem. The only hole that approaches that was the loss of Adams. On a one for one basis (new to roster) we are bringing up Casseres. On paper that is a net loss, though we will see how much once the season rolls along. We also have Rza for that spot who is no slouch and adds a bit more offensive firepower than Tyler did. The two of them will bear responsibility for filling the Adams role. A drop off, but gaping?

These were our holes spots needing improvement in the off season:

3) RW upgrade. Fail. Does Epps add anything we don't already have in Muyl/Valot/Ivan?

4) Outside back depth. Duncan back for Murillo support. Tarek adds LB depth

5) Depth behind BWP. White should improve and we just added speed with Jorgensen. Abang brought home, but...

How will Mines develop? Where will he play if he steps up?

Fernandez? Will he see any 1st team time?

Nealis is getting some good preseason playing time. Is he our 4th CB?

It feels like we have stocked our youth cupboard pretty well at striker, midfield and defense (not needed at goalie). Will anyone emerge this year?

Net net the big swing and a miss for me was at wing. Otherwise I think we are in decent shape and I think FAIL is a bit of an overstatement.

Still young enough to improve and likely to do so: Long, Davis, Murillo, Meara

Will he even be with us?: Abang

So I see room for improvement from the bulk of our team. Only BWP would I put in a "risk to take a step back" category. Of course there will be injuries and not everyone will improve. Players coming back from long injury periods are always question marks early on, but I think there is enough competition in most spots that we will field a competitive team.

Still hoping they will add an upgrade at wing in the summer if not now. The key will be how do we feel about this roster come the fall. Will we have gotten enough growth in key areas to have what it takes to go all the way?

I will Devil's advocate a little now that the Debbie Downers are back.

There is no question that we lost one of our best players in Adams. And that every year that passes we have to get incrementally more worried about BWP's speed and stamina.

But...here are some things that could happen:

How would you feel about Muyl if he improves his scoring touch?

Or that crowded pack than can play RW creates enough competition that someone of Muyl, Valot Etienne, Ivan, Epps steps up enough to own that position in a positive way?

What if Ivan just needed an adjustment period (not claiming future superstar, just some real contribution).

What if Rza's bigger role results in more scoring from our CMs?

Duncan stays healthy and adds defensive bite in games where that is helpful either as a starter or as a sub to protect leads?

How about White improves enough to give greater rest to BWP during the season?

Jorgensen is signed and by 2nd half is contributing as nice weapon to throw at tiring defenses as a sub.

Casseres establishes himself as a solid CM, softening the departure of Adams.

Continuity should be a real positive as well.

Not all of this will happen, but none of these are huge reaches.

Muyl and Lade are depth pieces. Very VERY good depth pieces mind you. About as good as you can get in this league. However, there is no way in hell we win CCL with either of those guys on the field. And the point of playing is to win trophies right?

Lade is depth, he is just filling in for Kemar who may be healed in time for our 1st CCL game.

Not adding at RW is a fail.

i hate this thread because it is a constant reminder that our owner does not have serious ambitions for us.

I don't know why people think striker/forward and wing are that easily interchangeable, except maybe in a 4-3-3

I actually think player classifications can be misleading, it really depends on the type of player they are. What we really need is a 3rd goal scorer to complement BWP and Royer. We need a troika. Pogba is a midfielder, but when he is "on" he acts like a striker when he gets near goal. Robben in his prime could cross with the best of them, but could also finish like a striker. We need 8-10+ from a 3rd player on the team. Maybe that will ne Kaku now that he is settled in, but given our formation it would be great to get more finishing beyond BWP and Royer.

Can he open up and widen the field, giving more chances for the whole team? That's what we will want to know.

That said, if he can develop into a super sub and spot starter when we need to give BWP a rest or when the speed and fresh legs can be most valuable against tired defenders, that has value in and of itself even if he never ascends to a full time starter.

Remember that one season with Henry? I dunno, I think our system puts a lot on our wide backs and Lade struggles - things were more simple in the 4-4-2 diamond when he made overlappng runs.

If you have to build your formation around Lade that is a serious weakness.

Cause you're only talking about one play when Atlanta bossed us around for the entire 90 minutes of that game.

When one or two players look bad, even for just a key moment, by all means they deserve the blame. When everyone looks bad for the entire game, playing a style they had at most two weeks to prepare for, how do you not look at the coach?

It's simplistic to say it is the coaches fault. Players have to execute, they don't always. And even more important, the other side gets paid to play too. You had too evenly matched teams. Both won a leg, but we lost in the aggregate. Was there some "blame" to apportion? Most certainly, Probably a combination of coach and multiple players, but you also have to give Atlanta credit too. You aren't talking about some 2nd rate squad that "stole" a victory.

I disagree on both counts. While Lade has done yeoman service for RB over the years, there has to be a point where he becomes surplus to requirements. At best he should be a seldom-used reserve.
The bigger shame may be that no one on the roster has displaced him from his current role.
As for the first leg against ATL, it seemed that their coach realized that Lade was the weak link in the back, and repeatedly attacked there, leading to the cross that resulted in the first goal. Of course, there was poor coverage on the receiving end, and hint of handball, but to say that Lade was also not at fault is too much for me. I would have preferred him to be much more physical, early, even to the point of a yellow card. But, he was probably instructed to cover, not body up.

Agreed. I am not anti-Lade, but he offers zero in attack and sometimes has to be extra aggressive physically on defense to compensate for his size. If he was a consistent starter he would be our weakest link.

However, for one game against a supposedly weaker opponent he can do fine.

If you spend 6M on a Kaku level player, you can also spend 6M by getting 3 players at 2M or 4 at 1.5M. Yes, the Kaku type is a surer bet, but if you get two or more the other way to contribute (provided you have patience for some development time) it can pay off.

Personally I like a blend of the two approaches. Of course if all they are doing is getting one player at say 1.5M instead of one at 6M, then we will be perennially close but rarely or maybe never reaching the promised land.