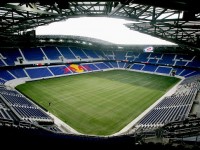 After his loan at Milan, I wouldn't mind having a go at Podolski for the LM spot in the 4231

His time at Arsenal is done, he's like 29/30 and the German team is so loaded he really doesnt have much of a future there outside friendlies.

Only like this move for the potential WAG factor ;-)

Is it ok to miss Petke AND enjoy the current product on the field? And still hate the FO? Is that ok? I'm actually a little confused mentally. Maybe someone more emotionally strong than I can help out?

I think commiting fan suicide is pretty dumb in most cases (mostly when you still love and care for the team) -- why the fuck would you only hurt yourself? People are in anguish over spending 12 bucks on a stub hub ticket for what? To prove some grand point by not showing up while you sit and watch on TV instead? Get a cute little date, enjoy a sunny saturday in Harrison, and watch some pretty damn good football inside the best stadium in North America. You'd have to pay me money to deprive myself of that.

I do agree that Marsch is a much better coach. I still don't think these players are really that great. And you can see the analytics show up a lot just by watching (soccer metrics love the high press with a lead, for example). They worked some sort of voodoo with Mike Grella.

Last year was 99% Thierry Henry and 1% Petke, objectively. Heck, I think Petke was a fool with how he handled/played Cahill. A better implementation of Cahill might have pushed us forward. But you still love the guy and they did stab him in the back, especially with the farce of a 1 year extension before firing him. Nice going away gift, I guess.

The only real shitty part about this is being made to look like an idiot. RB acted as if the fanbase were complete retards. Its very insulting -- its like telling your wife you dont sleep around while she is looking at  you with lipstick on your collar. They didnt fire Petke because he was a goal short of the Final -- they fired him because they didnt really think he was smart enough or willing enough to turn RB into the soccer version of the Oakland As. Thats fine, but shoot people straight.

I'm with this. I'm in an abusive, dysfunctional relationship, plain and simple. Owners don't respect the fans, the fans all hate each other, as someone else said, this shit is toxic. It's just time to get out.

MLS is ROARING from coast to coast in North America. This is easily the most exciting time to be a soccer fan in this country, and this league is blowing up. I deserve to be able to enjoy it. I deserve better.

I've been there from the very first year. I've sat in an empty Giants stadium countless times, over and over. I sat through a ten team bush league that was a joke. I sat through it all, and 20 years later when this fucking league has 20 goddamn teams, stadiums are sold out, and is about to pass Serie A and Ligue 1 for attendance, I can't even fucking enjoy it. I deserve to take part in what soccer has become in my country and in my league. I want out of this abusive fucking relationship.

And you can give me shit all you want. The MetroStars were the only professional soccer club I've ever truly loved. But the MetroStars are dead. They're gone, and they're not fucking coming back.

If seeing the South Ward today, after all that happened this offseason, isn't enough to convince you that's the truth, I don't know what ever will. If getting heckled for wearing Metro gear to a home game doesn't convince you, I don't know what ever will. The MetroStars are dead, and I want nothing to do with this shit that's been left in its place.

Fuck Red Bull. I'm not a Red Bull fan. I don't owe Red Bull or their energry drink or their brand shit. I owe myself. I'm going to some MLS games this year, and I'm going to enjoy seeing soccer succeed in my goddamn city. I deserve it.

It's going to be fun to watch a team not called Red Bull. It's been too goddamn long since I've been able to do that.

Thierry Henry repped Metro on his captain's armband, so if you think the bridge has been burnt, go fuck yourself and enjoy rooting for Oil Money FC that plays in the corporate shit hole known as Yankee stadium.

Does this mean everyone revolts and stabs Ali Caesar?

Id root for RB to own Metro forever and ever before Id root for a single one of those socialist, pseudo intellectual pussies holding up that banner to even have one day of happiness in their lives.

A guy came from nothing, while most people sat around stroking their dicks living paycheck to paycheck caring more about a soccer club than their actual life, to start a business and the business worked -- whether that should be rewarded by being able to buy a soccer team to fans dismay is a rather lengthy debate. However even if you disagree a sports club should be private property, this is going way too far.

That said . . . RB out -- I LOVE the fact they spent money on a stadium and world class players since owning the team -- I want them out though because like the Knicks and a lot of too big to fail businesses, they employ dumb people to make dumb decisions.

I would kill for Dwyer on Metro. He'd be great for BWP up top to get some space to work with.

KC looks awful outside of Dwyer. Dont think they will make the playoffs.

Metro was never going on the jersey just like Bodie was never getting off the corner and into upper management.

season will be canceled

Man, I remember either FIFA 12 or 13 when Hurtado was on Seattle he was an absolute beast, haha.

Zero chance he will ever come to MLS, but holy fuck, Donald Embolo is the best 17 year old I have ever seen outside of only Messi.

I might even go as far as saying he is the best player in the world under 23. Blazing speed, strength, balance, subliminal first touch instincts and an absolute rocket shot.

I think I would prefer that lethal efficiency at ST more than even what Neymar does on the wing.

Maybe RB are secretly sitting on a 75M transfer fee

This Taylor Ham/pork roll stuff reminds me of the reception I got ordering home fries at a Perkins just off of Rt 80 in Stroudsburg PA. Miss snooty waitress corrected me by telling me "we call them breakfast potatoes here". Since I am not an early morning person I told her "whatever you call them, just bring them". Of course that episode spurred the family's entertainment for the rest of the journey to Niagara Falls because every time I mentioned something someone else would say "we call that...".

I have some friends from CT who refer to subs as "grinders".

"Hey man, I'm gonna get that Italian grinder for lunch later on at Paul's Deli."

Italian grinder? Sounds like an ex-mafia hit man. Count me out.