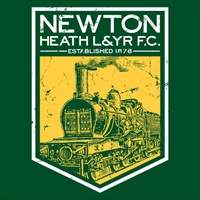 Mibabalou hasn't added any friends yet.

Can you change the font for the back-ups,
so that it is easier to read? Thanks

Hmm, I dont think I can.

If someone has another site or suggestion on how to write it I can.

Would a excel made version of a pitch be better, I could try that all names would be the same.

Looking at the roster building its so so so strange to see a team with 0 top class MLS ST's decide to play with 2 up front.

or kaku went to Real Sociedad

Something to do with them....

I watched the game so want to leave some thoughts,

Lapsley was solid, needs works commanding and distributing but was a good shot stopper.

Egbo looked a tad rusty and I didnt see him as a level above the others which could be a worry since he was supposed to come in and really be close to duncan whos playing very well right now, maybe hell get better with more time

Boateng got injured so again its the same as 2019, he will 100% not stick around until next year if this continues...

Fala was interesting, 6 7 is an absolute giant but he seemed at least as mobile as nealis, since hes a converted ST i dont think its fair to be harsh on him so as of now im excited to see what he can do.

Bounthong, 1st game so again lots of room for imporvement, not sure why Tolkin wasnt playing at LB, but right now he was poor.

Zajec was pretty average, tidy on the ball but not enough going forward

Lema, about the same passing was off and not enough ball in to break the lines.

Muyl was better on the ball than most on here give him credit for, he did lose it a few times but I think he was trying to be more aggressive which is fine by me, we obvs got shut out so none of the attackers were great but he was good.

Strouds control and tight dribbling was very good, he has the technical ability of a first team player hes just not physically gifted.

Omir / mines , very poor but personally i think they're setting up both to fail, really both of them arent 9's and they're asking them to do a lot of that hold up get on the end of crosses which isnt their game. Just so strange as we've gone with the 2 ST system despite really from the first team to the 2nd it being our weakest position and were now just putting mids there.

Overall it was a poor performance but youd think with a front 6 all being 1st team guys we would have scored but watching them whip crosses into mines and omir just seems so so so stupid.

I like the 4222 but its just strange the way were playing it, look at RB Leipzig, Werner, Schick, Poullson all pretty physical guys yet were going with omir and mines?

I get we need first and 2nd team continuity but I just feel we dont have the players for this, or if we do stop crossing the ball altogether and use their passing and dribbling more.

TB is always a good team so not too much stock in this but not a great start.

@KristianRDyer
. What do the fans wants ? A guy with big career, plenty of money who doesn’t care about the team or the organization ? Or a guy from L2, who is ready to fight, who is hungry, and will be proud to wear this
@NewYorkRedBulls
jersey like I was at each game?

Massive improvement on seagrist, who IMO isnt a lost cause he just needs a year at RB2 as most college guys do.

Id still be ok with Tarek starting LB vs minny if long is back and Pendant aiming for Miami or Orlando.

Just read the xG for each teams in this match were

We should have been destroyed this match dont let the 1-1 result blind you...

I would definitely give this a try. White and Narlow were both ok at best, so why not throw your DP attacker out there and see if anything clicks. The concern would be his less than stellar track record scoring goals, but maybe that would be better here.

Would be peak metro to finally go with two STs and neither be Strikers.

Man I think I was legit the harshest Bucky critic here. Even in RB2 I liked rito and even kutler more.

Saying all that cutting him now is pretty trash. Should have done it the day after philly and give him a chance to find a usl team.


But him and Ivan whoever gave these guys deals needs to be fired.

FCC are truly awful and Id be willing to bet at least 5 USL Championship teams would beat them. 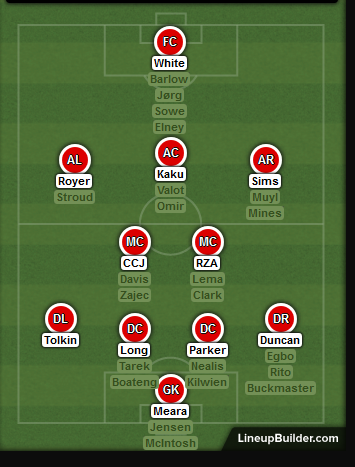 changes are losses of taxi and additions of clark

Absolute joke we let them use our stadium.

Tell them to fuck off and play in Hartford.

Im gonna try to do one of these every maybe 2 weeks throughout the season. 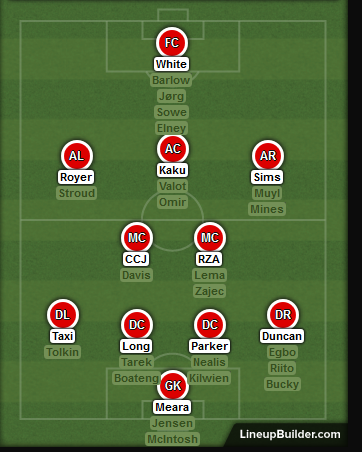 I only have players that are officially signed either RB or RB2, and moving forward I wont add players I dont feel I can judge correctly yet.

Also I wanted to only put everyone once so is RZA went down Davis would be starter and if Royer I imagine sims to LW and Muyl to RM,

Only real controversial one is Rito over Bucky and it will take a lot for me to feel different.

back to the 4th division in germany, still no fucking clue what we were thinking....

I think both of these guys were brought in as equals to what we have and honestly I could see them both being the starters soon not just here for depth.

I'm fine with the moves but in the context of still missing attacking assets and since were in a salary cap league where let's be serious you can find good cheap American options at both GK and RB it makes me less excited.

Or 4222 with white and Petridis up top