63 replies to this topic

Hmm, I dont think I can.

If someone has another site or suggestion on how to write it I can.

Would a excel made version of a pitch be better, I could try that all names would be the same.


Looking at the roster building its so so so strange to see a team with 0 top class MLS ST's decide to play with 2 up front.


I can read it clearly. Thanks for whomever put the visual together. 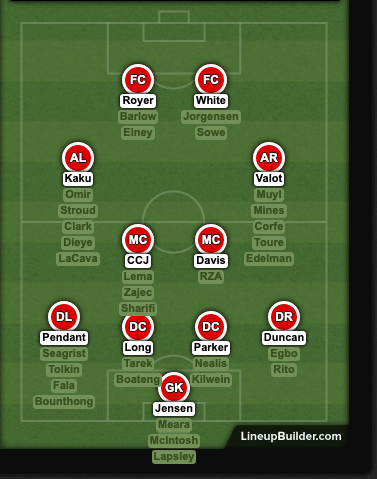 No changes at the ST pool but I would say Royer is the only one of those 6 to play even decent so far this season.

Attacking mid, bunch of changes. No more Sims, and added Clark herre instead of a CDM. And added LaCava, Toure and Edelman anywhere.

At CDM its still CCJ and Davis and i guess I should have moved Sharaifi over but im sure you get it.

LB and maybe Fala over Tolkin but Ive only seen him play twice so for now still Tolkin.

Some might say Tarek over Parker but ill hold off for now.

i think last year they did short term loans to RB2 to work around the international slot probably.  Jorgy is a prime candidate for that if he is not making the 18.  though if hes loaned there again this year would be surprised if he wanted to stay here.