Can we bring some real talent here?

67 replies to this topic

he's the only one who has used he contacts to actually make the team better.  Roped in Clark and Lacava in first year.  Good to supplement our domestic pipeline which has dried up some. 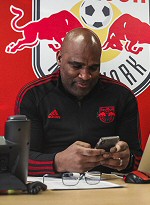 There's a hilarious irony in the team's lack of spending working out for them. If there was ever a season to slash payroll dramatically and spend fuck-all, it's the season where a pandemic sabotages everything and sends every business into financial catastrophe. They basically fumbled the ball into the endzone for a touchdown.

Where is our head of sport?

Hamlet should be blending into the background somewhere managing the menu with Delaware North.

Where would RBNY be without the draft?

Where would RBNY be without the draft?

we'd be better because we can promise the top pick playing time instead of picking in the teens.  Dont see why they wouldnt come to us since we give them a chance.


Perhaps Austin can loan him to us for some MLS
experience, instead of leaving him in Paraguay.


2 user(s) are reading this topic