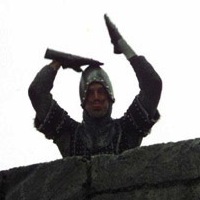 In Topic: Some fans are back

Poor Reggie. He could have said: I have First Amendment rights and so do they. I do wish they would save the boos for when I concede a penalty.
Or: My family has a long history of being oppressed by our racist society. My grandfather was denied the Nobel Prize for Science. Oh, my bad, he was awarded the Nobel Prize! Or how my parents were denied admission to medical school because of their race. Oops, they both attended Ivy League medical schools and are physicians!

For example, you are an asshole; however, that doesn't accurately depict the majority of people on these boards, who are decent people.

In Topic: MLS salaries are out

These numbers only enforce my opinion that Armas deserves a lot of leeway.  Marsch was a genius miracle worker for getting what he got out of such a cheap team.

Speaking of Armas, do we have any idea how much he's making? Or how much Jesse made before him?