MLS to return for July tournament?

90 replies to this topic

MLS is tentatively planning to take all its 26 teams to central Florida for a summer tournament, according to a report from the Washington Post. The competition would not be part of the suspended regular season, and would instead be a standalone event that would see each team play a minimum of five games without fans in attendance.

The league is reportedly targeting June 1 as the date for team arrivals to Orlando, and matches would begin to take place on July 1. The games would be held at the ESPN Wide World of Sports Complex, which is located on a piece of the enormous 220 acres that Walt Disney World owns in Orlando.

The league has also braced for not playing any games until at least September.


Your link did not open for me.
https://www.google.c...?outputType=amp

Your link did not open for me.
https://www.google.c...?outputType=amp

Strange, SBI removed the article... the one it credited on Wash Post is still up, but it's behind a paywall:

Strange, SBI removed the article... the one it credited on Wash Post is still up, but it's behind a paywall:

With no indication of when it could resume its season in home markets amid the novel coronavirus pandemic, MLS has proposed placing all 26 teams in the Orlando area this summer and playing competitive matches without spectators at the Disney sports complex and possibly other locations, multiple people familiar with the plan said.

Players, coaches and support staff, numbering more than 1,000, would live under quarantine at one of the large resorts near Walt Disney World for an undetermined length of time, said those people, who spoke on the condition of anonymity because they were not authorized to speak on the matter.

Teams would practice and play primarily at ESPN Wide World of Sports, which sits on 220 acres as part of Disney’s massive footprint in central Florida. Disney-owned ESPN is one of MLS’s broadcast partners.

Spokesmen for MLS and the MLS Players Association said they did not want to comment. The Walt Disney Co. did not reply to a message seeking comment.

The league is expected to accelerate plans over the next two weeks and set the framework for resuming a season that, because of the pandemic, was shuttered in March after two weekends of matches.

In jurisdictions where such activities are permitted, several teams have begun voluntary individual workouts. The league has postponed all matches until at least June 8, though the realistic timetable stretches deeper into the summer.

MLS hopes to soon allow players to begin training as part of small groups in local markets, a step the Bundesliga took last month before ramping up operations. The elite German circuit, along with the country’s second division, will resume this weekend with matches played without spectators. Other European leagues have also made plans to restart their seasons in the coming weeks.

Under its Orlando plan, MLS would welcome teams for workouts and multiple matches per day, which ESPN platforms would carry. It’s unclear whether the league’s other TV partners, Fox Sports and Univision, would show games.

Without spectators in the stadium, MLS is eyeing opportunities to bond with fans through behind-the-scenes packages and interactive engagement on ESPN and the league’s digital platform.

“We are more optimistic about what a return-to-play plan would look like,” Commissioner Don Garber said on Nashville SC’s website last week. “A month ago, we were very pessimistic.”

Chris Durkin puts D.C. United in past with transfer to Belgium’s Sint-Truiden done

Players would have to be tested regularly — provided tests are even available in large quantities — and undergo regular medical evaluations.

They would not be allowed to bring their families, two people familiar with the plans said. For those with children, it would place a long-term burden on their spouses, and it would put emotional strains on relationships in general.

The league would also have to consider the health and safety of hotel and stadium employees, bus drivers, security and TV crews and accredited media. MLS would presumably have a contingency plan in place in case anyone tests positive.

“What is most important is to ensure they are safe in whatever environment we are able to develop to get them back to train first and then obviously get back to playing games,” Garber told Yahoo Finance last week.

At some point, the league would plan to send teams home for games without spectators, though varying degrees of state restrictions might leave some unable to host matches in the foreseeable future.

The Orlando idea is among multiple options that have been considered by MLS, which, like other pro sports leagues, is exploring ways to play without endangering players and employees.

Among the proposals is to select two or more locations to stage workouts and matches this summer. The league has also braced for not playing any games until at least September.

MLS does have some calendar flexibility. The regular season is scheduled to end in early October and the postseason one month later. In the past, the playoffs have finished the second week of December.

League officials have said they would consider playing a truncated schedule into the winter and holding MLS Cup at a predetermined, warm-weather site in early 2021.

The scheduling plans come as MLS and the MLSPA continue to negotiate salary cuts for the players. The league, which relies heavily on game-day revenue, sent its latest proposal to the union late last week.

MLS has proposed placing all 26 teams in the Orlando area this summer and playing competitive matches without spectators at the Disney sports complex.

What will happen if anyone tests +?
https://www.juvefc.c...-serie-a-stops/

I am glad they are exploring options as I really want to watch games but glad they are considering family and local worker burden.

What will happen if anyone tests +?
https://www.juvefc.c...-serie-a-stops/

Not sure what MLS will decide, but if "one positive test and the season stops" is the standard, it hardly seems worth the effort, preparation, planning to restart.  Hopefully the MLS finds a better answer.

Since the lockdown started I can only say that live matches were surely missed enormously by me & all Metrostars fans. This is very great news & can't wait for the start of tournament. I hope that these games will be covered by MSG,ESPN,Fox sports, Fox, ABC and spanish language stations.

Ooh. A chance to put another Mickey Mouse Cup in the trophy case! 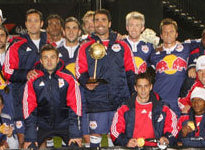 Union player tested positive but back on 4/1

I'd rather they not play at all than do this weird Covid tournament. I don't really see the point.

What if Mickey Mouse or Donald Duck test positive?

I'd rather they not play at all than do this weird Covid tournament. I don't really see the point.

I'm so desperate for actual competition that the other day I intently watched a 2 minute video of marbles racing down a Hot Wheels track. I'll take what we can get...

the other day I intently watched a 2 minute video of marbles racing down a Hot Wheels track.

I truly do not understand why you would go out of your way to get all the teams down there and have it be a tournament that doesnt count for anything.  Just let it be regular season games.  I understand that they are still holding out for games at the actual stadiums but those will most likely be behind closed doors anyways.