16 replies to this topic

Hilarious, I can't help but wonder if they're not calling him out by name just to be kind on social media or if they genuinely don't remember him. 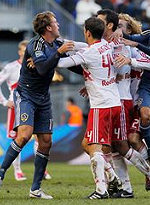 My understanding was that he had the idea, told management, his teammates told him not to so then he asked not to. Red Bull wanted him to do it. Then there was an issue with getting the Red Bull vehicle onto the field due to the weight of it, so it paused in an awkward spot right outside of the tunnel. I remember that Juan Pablo Angel, who went to Chivas that year, was vocal about it on Twitter, well before players were vocal on the platform.

After the fact he played it off as not thinking it was a big deal.

This was genuinely absurd.

Are yall talking about the game where he drove on the field with a chick playing violin and he was spinning techno music? I was sitting in 201 that day, everyone in the section thought it was fucking amazing.

Fair response by him - doing some hype at half time to pump up the crowd is an absurd thing for the players to be upset about, and certainly nothing to blame for their poor performance on the field.    I was pretty surprised by how pissed off Dax et al were about about.  He seemed like a team-guy, who put a solid effort in on the field, certainly not some locker room cancer or Aguedelo-type hot dog.

I could see how a no-nonsense type like Dax would have a problem with anything that even remotely resembles distracting nonsense.