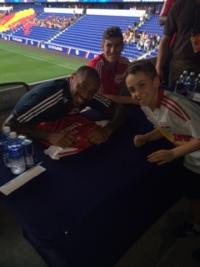 BWP is the only one where we truly lost something for nothing. It was essentially a salary dump, but what good is that if you don't give that salary to another player...

Not sure what anyone should be expecting to get for a 35 year old striker coming off a season he had 2 goals in 24 appearances.  The real issue is your last statement, they never replaced him.

Out of necessity, we played an bunch in that formation in the second half of, I think, 2017.

Others have told me they were mostly playing 3.
I dont know if anyone would have stats on that.

Duncan & Pendant were definitely playing further up the pitch than the CBs, I just thought they weren't involved in the attack enough.

Get the outside backs forward, great in theory. Need more moments like Pendant combing with Kaku and making a run behind the back line.

Unfortunately, both he and Duncan are sometimes too tentative going forward. Pendant checks back to the CBs or pumps aimless long balls too often, Duncan has the speed but not the ability to take on defenders.

Of course that could also be the function of playing with too many players who are too static to be consistent options in the attacking third.

Too often they looked like they were playing 5 in the back, not 3.  Was that Carnell's instructions or was it the wingbacks.  If we stick with this formation, they need to play more like midfielders than defenders for a larger portion of the match.

Pendant is not a great offensive player.

Too early to say that with any confidence. Sure, he's unlikely to reach Taxi's level, but he did put in a perfect cross on the Royer goal.  Agreed, that if we stick with three CBs, he's got to push forward more.  Let's give him some time to figure it out.

Completely agree that Armas was a contributing factor, but a couple of more million in annual spending could have put us over the top under Marsch and certainly wouldn't hurt under whoever our next coach is.

We're not asking them to spend like ATL or LAFC or Inter Miami, but being at least midtier in spending would be a significant improvement.

Yea, we were probably a winger or two away from winning in the Marsch years. Most of his teams were really balanced, we just needed a little more in the attack.

They just announced our next few games:

I haven't seen any of their recent games, but looking at the table, they are averaging ~1.7 goals a game (scoring and conceding), while last year it was closer to 2.5:1.

Certainly a two-way issue, but at least they have an easy path to getting the attack back on track whenever Vela comes back, assuming he plays at his 2019 level, of course.

So they're scoring, on average, .4 less goals per game, but are allowing twice as many goals against per match.  They miss Zimmerman as much or more than Vela.

I'm not saying Zimmerman is more valuable to a team than Vela.  But, if you build your team with high price attackers like Vela, Rossi, and Rodriguez and you do so at the expense of your defense...  I'd argue LAFC would be better with Zimmerman and only two of the three mentioned attackers.

Essentially losing the league MVP will do that, guessing they'll be fine or better if/when Vela eventually comes back.

LAFC paid transfer fees of ~$3Million for Rossi and ~$11Million for Rodriuez.  I get it that Vela is the best player in the league and that they may not be breaking season point records without him, but they still have attacking talent.  They're a mess in the back and it's hurting them defending and going forward.

Their situation now is based on losing Vela AND Zimmerman.

Depends. We need a mobile poacher to make this work. White could have been the answer but he doesnt look like the same player. Seems like he is not 100%. I also know nothing abt tetteh.

Not sold on kaku. He just doesnt fit. Not aggressive on the offensive end. Doesnt play defense. Ih he played with royer's heart, he would be a 20-30m player. But he doesnt andvwho knowd Where you play him? Rather have valot pull the strings.

And for royer, he has been a trooper. If we unload him now we could get something of value. If we cant, then he is a 60 min player in this team. I am a fan of stroud and mines. Both play fearless and with a lot of aggression. I dont think we will have a significant drop if royer is sold.

Ideally, i would like to bundle money from a royer and kaku sale and bring in a complete forward. Maybe a longterm dp contract for michy batshuayi, jhon cordoba or borja mayoral. Cordoba would be my preference.

Maybe White's hurt, but he and you and I have the same amount of goals this season...

Kaku had like two or three goals last year that were a direct result from pressing the defender or keeper.  He plays hard and can press.  This year is more about him playing out of position and without a talented striker.

Royer is a 30 year old, coming off a mediocre MLS season.  Who exactly is going to buy a player like that?  You move on from him because you think you can upgrade, but you're not getting any money worth mentioning for him.

If kaku was a good player, we wouldnt be having this type of season.

One, that's not how things work.  Two, he's been serving the ball into strikers that "can't finish a sandwich" (see the MLS is Back Atlanta match for what happens when he hits a target that's useful).  Three, he's been playing out of position.

Ok, isnt it kaku's job to create scoring opportunities? He is on pace to have 3 assists this year.

See above about Kaku (no striker, out of position, minutes have been limited).

I dunno, I stand by what I said after the MLS is Back Tournament that many players on our roster are not MLS caliber and belong in USL or waived. The guys people listed as "needs time to develop" do not belong with the first team. Send back to USL and keep them there until they can contribute and add value immediately.

Certain players won't grow anymore against USL competition, they need to be brought up.  If they can't play, move them on.  There are some, like Fernandez & Mines, that can contribute now, but they need to continue to develop into players we can rely on game in and game out.

Surprised there are people that think right back needs an upgrade.

A lot depends on what theyre trying to do this season.  If its win games and MLS Cup, then start Tetteh and bring White off the bench.

If they think thats unrealistic given their present squad makeup, if the goal is get a look at guys, maybe what combination of players works best, and to put together a plan for next season Id probably play Tetteh and bring Jorgy off the bench because he has the most upside.

At this point, I think this is a lost season. I just want to see how good the new guys are, so get Yearwood and Tetteh as many minutes as they can give.

Thiewell seems to know what he wants, what it takes to get there and has contacts to try

Yea, Id argue stupidity over arrogance. We did, and still do, need a Plan B for when Plan A didnt, doesnt, work. The issue with Armas was that the Plan B became his Plan A.