Well, since Isaac is taking a break from doing the pregame report, here I go.

San Jose sucks. They've only earned 8 points at home from 7 games, just over 1 point per game.

Unfortunately, the Galaxy aren't much better, 8 points on the road from 6 games.

Plus Eddie Lewis is out for being a moron.

With Cochrane and Convey out, that's a good chunk of their offense. However, we may see Huckerby, which won't be good for the G's. Huckerby by himself could likely outplay all of the G's midfield - really, they are just that bad.


I fully expect the G's to lose.

I predict the man of the match will be the traveling fans, as we will be disgusted with the on-field performance (but I'm a pessimist).

Isaac spends way too much time on these things every week. Hopefully he will look at how sad my preview is and get motivated again.

Every red carded player should be made to stand in goal facing backwards in every training for a whole week, while all others can have freekicks or pks at them = punishes the redcarded players & instantly improves targeting + deadball skills.

as for the line up: Magee deserves to sit for his crap performance, therefore I'd prefer Dema in the middle and Klein on the right.

why doesn't Bruce make any trades at all ?

I'd say I expected us to lose, but SJ is one of the very few teams in the MLS who plays worse than we do. Their defense is straight out of LA 2007 stylie. If we can link a few creative passes together (...) this could be a walk in the park and a major confidence booster.

Every red carded player should be made to stand in goal facing backwards in every training for a whole week, while all others can have freekicks or pks at them = punishes the redcarded players & instantly improves targeting + deadball skills.

A bit harsh in the crappily reffed MLS...though not saying our red card last week was bad!

why doesn't Bruce make any trades at all ?

how dare you question il bruce! he is teh infallible!!1! 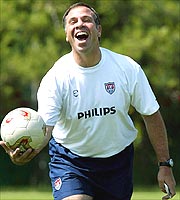 There wont be any cockrain, so I predict we will.........TIE. I had hope before the Real Salt Lake match, now I'm just as sad as last year.

There wont be any cockrain, so I predict we will.........TIE. I had hope before the Real Salt Lake match, now I'm just as sad as last year.

This match is critical. Taking a bad loss is one thing. Whether the G's can rebound from the loss is the critical thing. Ricketts can't stand on his head every game, so the G's need to become better, especially at the midfield. This is a test for Bruce and for the team. Without Lewis in the lineup it will be especially important that the G's play well. This is a game that the G's should win. You have to beat the teams below you on the table. This could be the most important game of the season so far.

Although the team has not quite arrived at the "must-win" stage, I will concede that this match can prove to be a turning point in the season.

The SJ central midfield is hurting and the only threats on their roster that need to be contained are Alvarez and Huckerby. The SJ backline is also very much on the weaksauce side and are notorious for giving up late goals this season.

Despite the real possibility that this is one of the few away matches that should end with G's nabbing three, I will severely temper my expectations.

It will be another ugly one. No doubt. Edson has performed well against SJ in the past. That is all we can hope for...

SIDENOTE:
Trades? Who exactly could or would Bruce trade? I'm sure teams in the league aren't exactly lining up to make a deal for the likes of Sanneh, Miglioranzi, and Mike Magee.

At this point, Bruce should be thinking about a second round of cuts rather than trades....

A little concerned about possibly seeing the Buddle/Gordo pairing again. They looked good together in Toronto, not so much against the Mormons.

A little concerned about possibly seeing the Buddle/Gordo pairing again. They looked good together in Toronto, not so much against the Mormons.

Those two need a strong midfield showing or they will not see the ball enough in good enough spots to make a difference. The G's need a link between the defense and the forwards when those two play together. None of the midfielders the G's have at the moment seem to be able to provide that link consistently. You can't depend upon the flank players to make the connections. In transition they are usually later to arrive since they must cover more territory. No it is the central midfield that will make Flash and E-Bud successful or not. This should be really interesting.

We cannot lose to these turds. Vamos culeros!

This was the game last year where we basically lost our mojo after. This year let's hope its vice versa and find our mojo

(Who am I kidding, we're gonna lose 2-1. SJ looked to be turning a corner last week and could bring their A game against us)

I agree with what Catamount said and have nothing more to offer except that I think we will actually win this.

I agree with what Catamount said and have nothing more to offer except that I think we will actually win this.